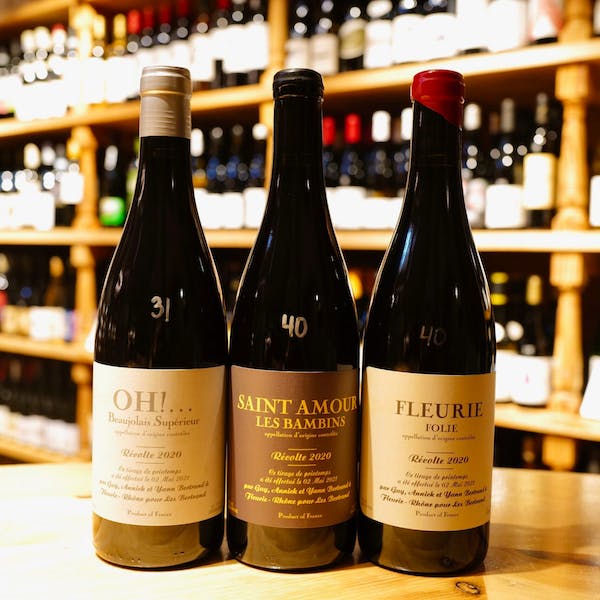 Hooray we have  our new allocation of Bertrand Beaujolais!! We are so excited for this drop that we will offer 15% off if you buy 2 or more (this week only)! It will go quickly so please email exchange@edmundoast.com to reserve yours! If you have not heard their story then keep on reading 🙂

The Famille Bertrand domaine is made up of a 7.5 hectare vineyard which lies mostly in Fleurie with a bit in Morgon. The vineyard consists of vines ranging from 30 to 110 years old. Yann’s parents Guy and Annick took over the domaine in 1992 and have slowly been converting their vineyard to organic viticulture. The domaine became certified organic in 2013 just as Yann took over 1.5 hectares to farm on his own using biodynamic principles.

Yann purchased the 0.75 hectare vineyard in 2015. The vineyard lies east, right across the road from the eastern side of cru Morgon. The vineyard is separated into three parcels of 30, 60, and 90 year old vines.The name of the cuvée name displays Yann’s passion for natural wine and his respect for vigneron Jules Chauvet. Chauvet is one of the first men to work in natural wines and his first cuvée was named “Pure Oh!rigine.”

Fruit for ‘Bambins’ comes from blue volcanic and schist soils at the northernmost tip of Saint Amour. The name ‘Bambins’ (kids) references Yann becoming a father for the first time two years ago.

The ‘young vines’ (30-60 years old) from the family’s 7.5 hectare vineyard which lies predominantly in Fleurie with a bit in Morgon. Extremely limited production.